A few years ago, we moved from the Midwest to the Pacific Northwest.  My daughter was starting 7th grade, which can be a difficult time for a girl to change schools.  Partway through her first year in the new school (where I was also the principal), her teacher came with a proposal to co-raise a puppy for Guide Dogs for the Blind. 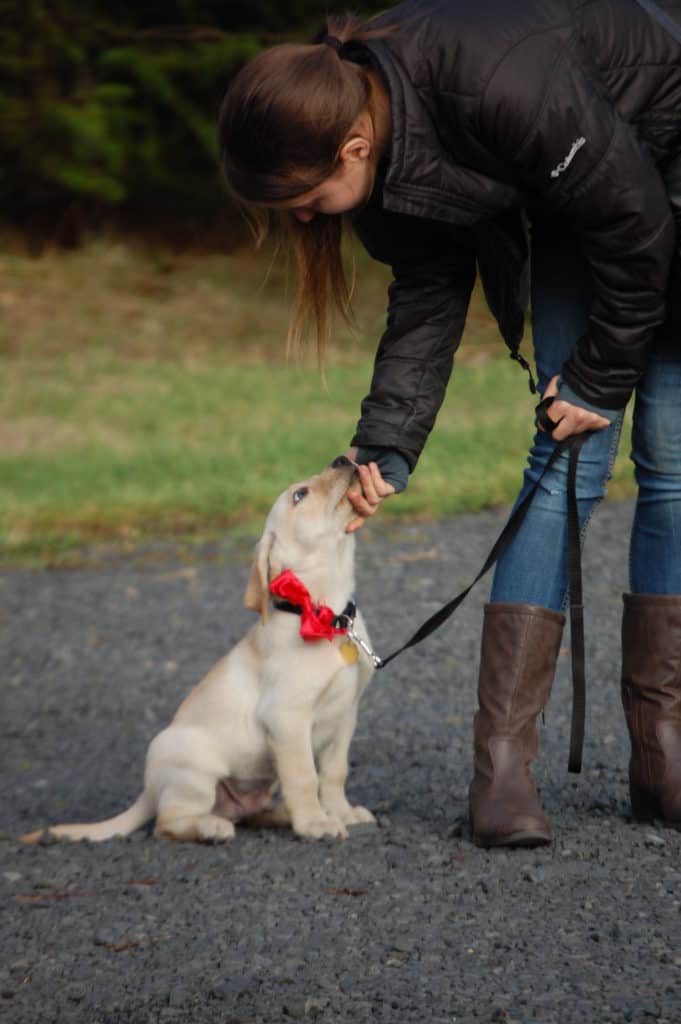 The puppy was in the classroom some days each week and then would be with its other raiser the other days.  The school had participated in raising two Guide Dog puppies previously so the community was ready to accept a new puppy.

This ended up being a tremendous opportunity for my daughter.  She became one of the students who provided for much of the care for the puppy throughout the school day and she quickly bonded with the idea of raising her “own” puppy. 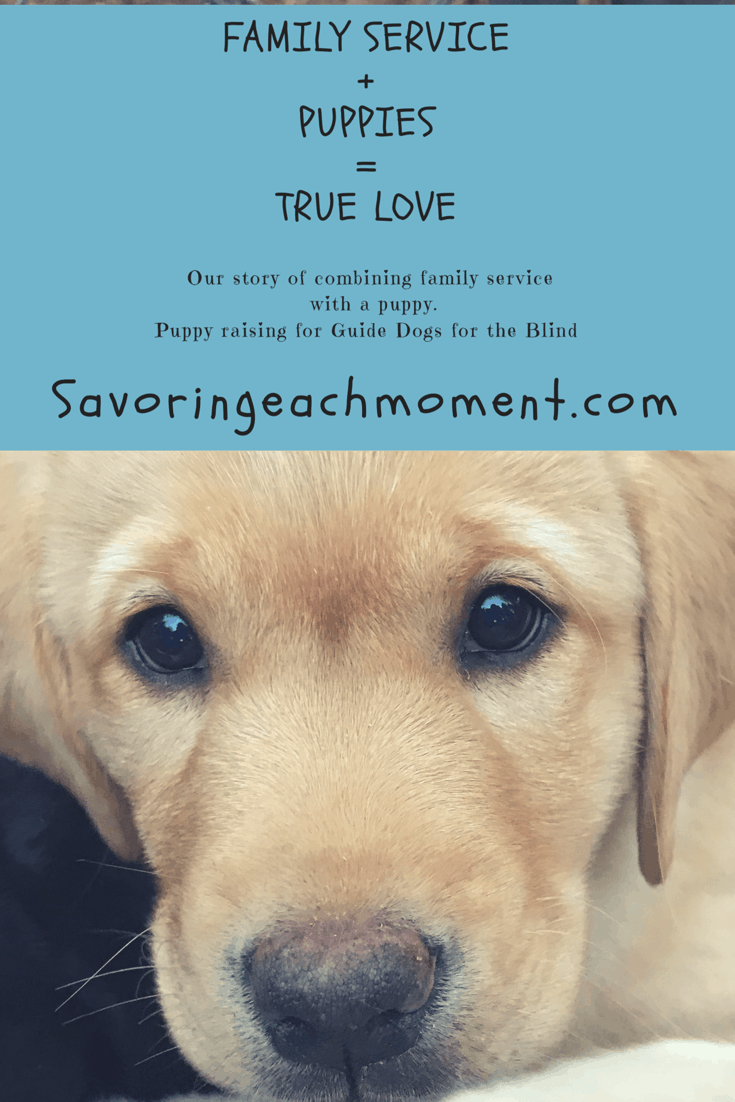 She began attending puppy raising group classes twice a month with the other puppy raisers in our area and they encouraged her, taught her, mentored her, and pushed her beyond what she had done before.  Part of the process of becoming a puppy raiser for Guide Dogs for the Blind is to have a home check and a trial puppy sitting time to see if this is really what you (or your parents) are ready to get into. 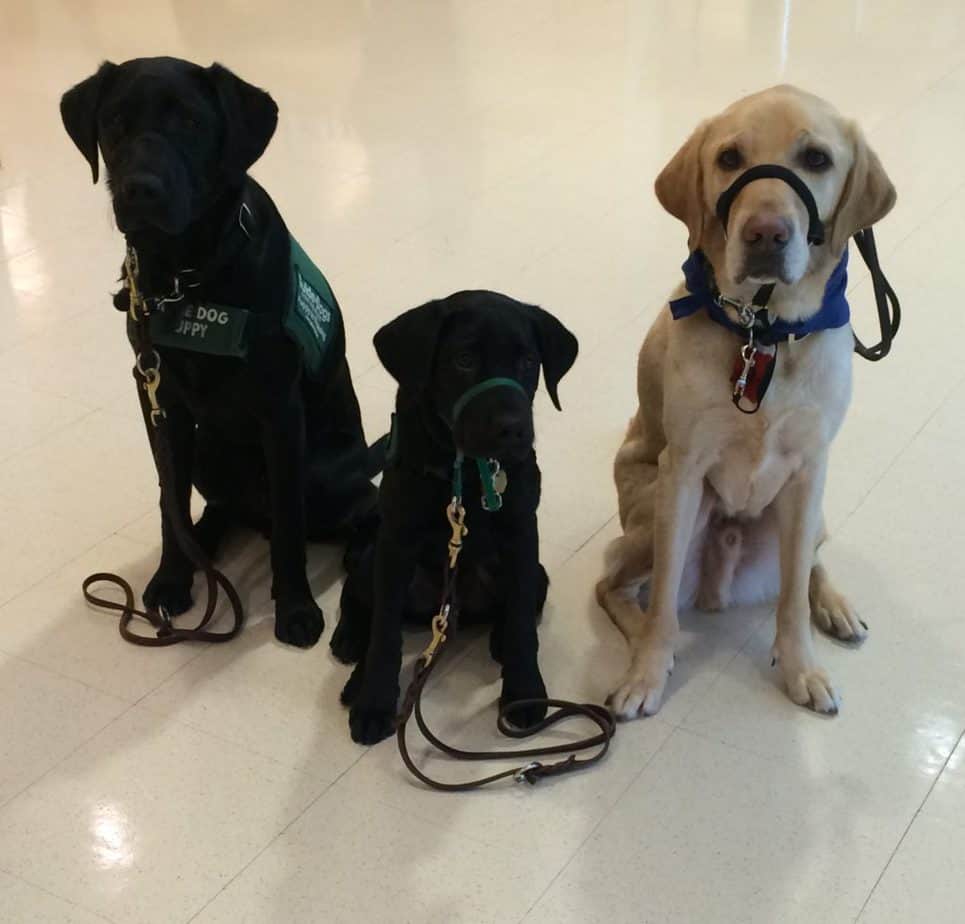 I have to admit, I’ve always been a cat person, myself and I’ve said that if I WAS going to get a dog I would want it to be a larger dog but it would ALWAYS be outside!  Well, you can see where this might lead.  Guide Dogs for the Blind only train labs or retrievers so they are large, BUT, the dogs are to live in the house and be with you ALL OF THE TIME!

So, we had our house checked for safety and then signed up to puppy sit a 4-month-old yellow lab named Takoda.  Of course it was love at first sight for my daughter!  He was wiggly, licky, and terribly playful. 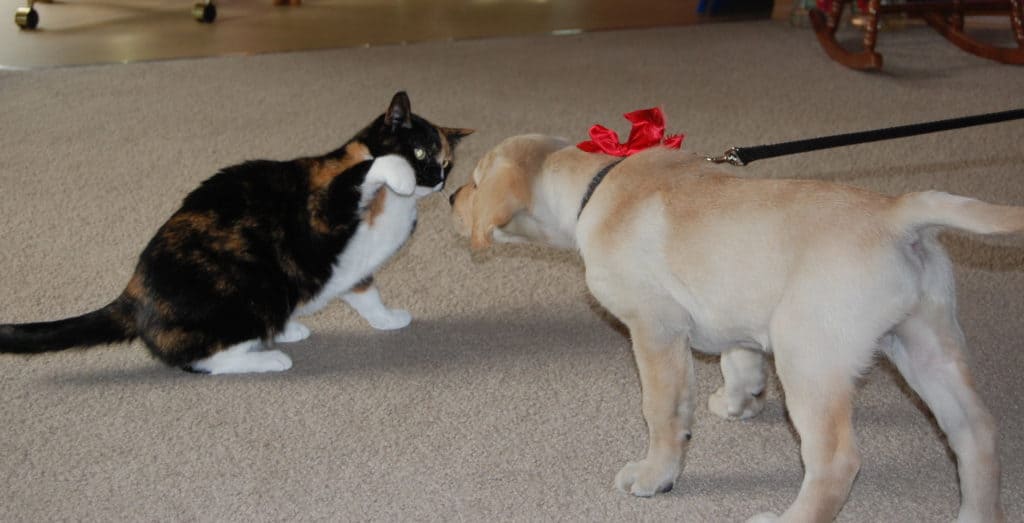 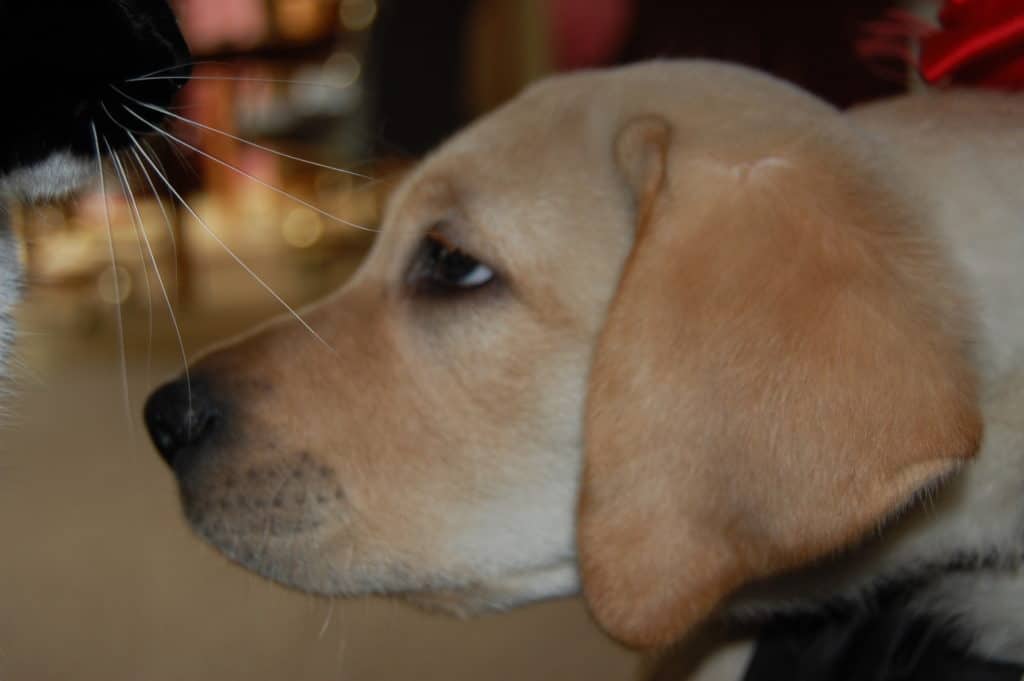 Our cats were as high as they could get in the house and were still traumatized!  By the time the weekend was over, we were all exhausted but smitten with the idea of doing this again. 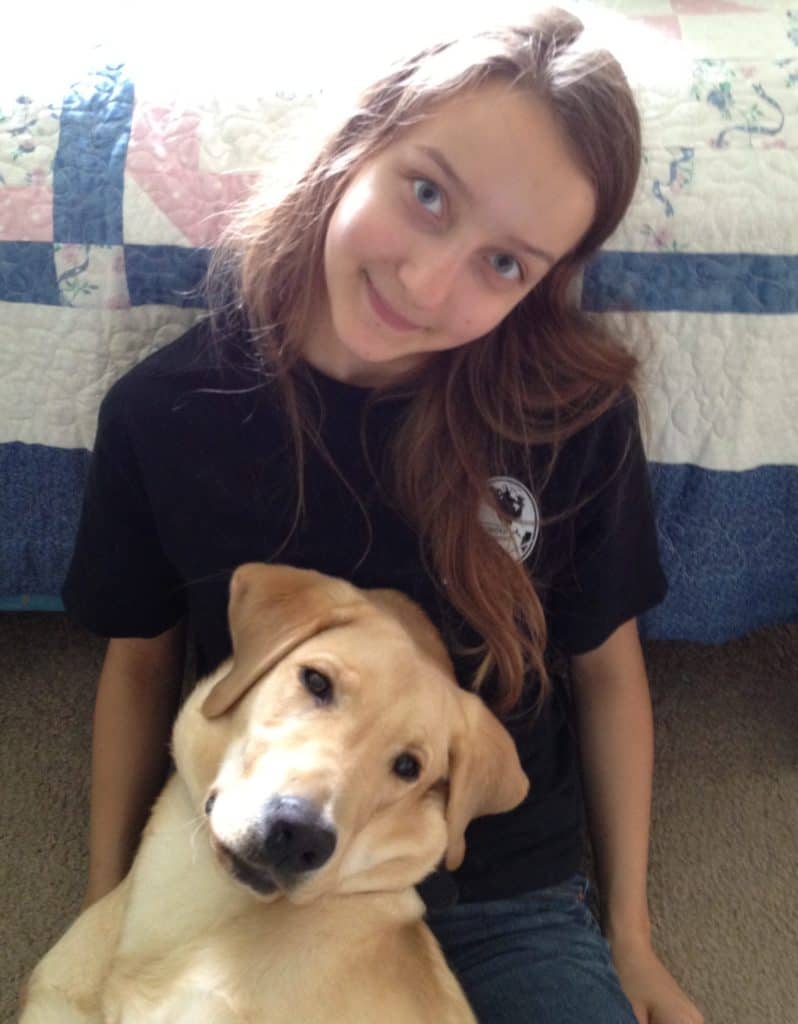 We filled out more paperwork and started the waiting game.  I was now attending group meetings as well since I had never had a dog and didn’t know the first thing about raising a puppy, let alone, how to train a puppy to be a service dog.

A couple of months later, the raisers of Takoda had some family situations and needed to move on without the responsibility of a service puppy to raise, so Takoda was transferred to us.  He was now 6 months old and still just as rambunctious and lovable.  My daughter was beyond thrilled!  The cats on the other hand, were NOT!  We signed up for a points card at Petco and bought a bed, kennel and a heap of chew toys along with a 50-pound bag of puppy food!

Takoda started coming to school every day and he loved the kids, the gym, greeting at the front door, and loved all the attention and love he received.  He also loved the other guide dog puppy, Oak, who was also at the school.  They played together, slept in a crate together (by their own choice) and loved being at school. 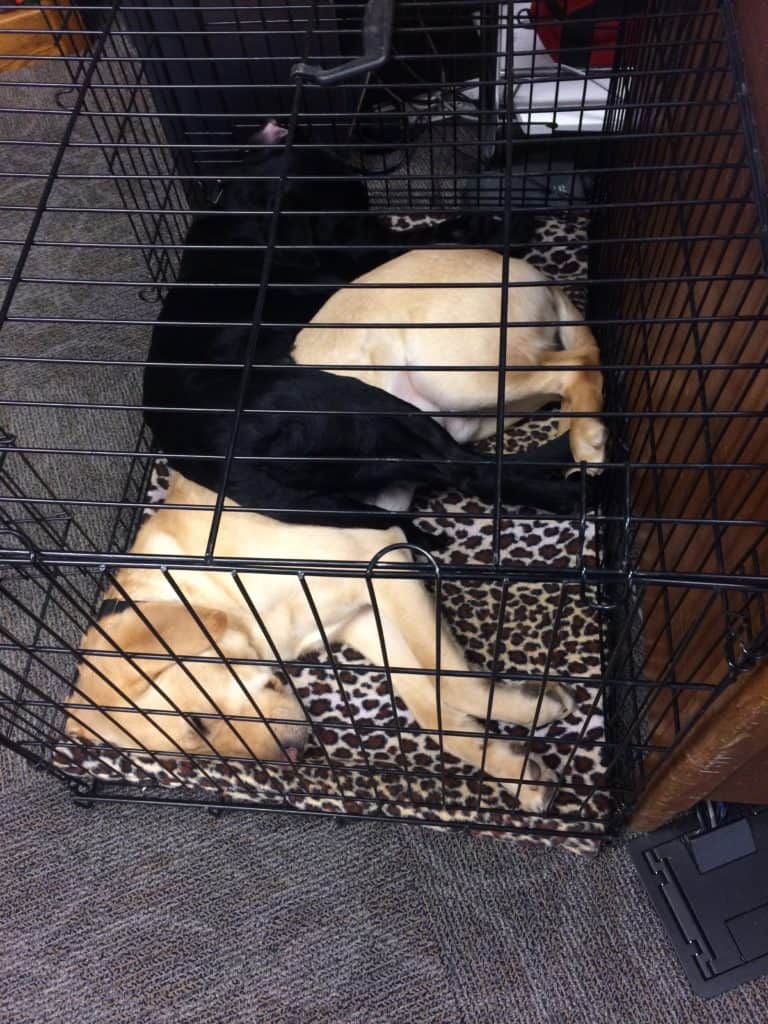 Usually, a raiser gets the puppy when they are about 9 weeks old.  They are fat and sleepy (if you’re lucky) and very uncoordinated.  But that changes very quickly as you work with them on a leash.  Some of the first training for the puppies is to walk on leash – all the time at first, relieve on command, and no barking.  As they get older, the training specifics change.  As a puppy raiser, it is the raiser’s job to socialize the dogs as much as possible so that they are not timid or afraid.  So, the puppies went to school, church, shopping (that was fun the first few times!) and anywhere else you might go. 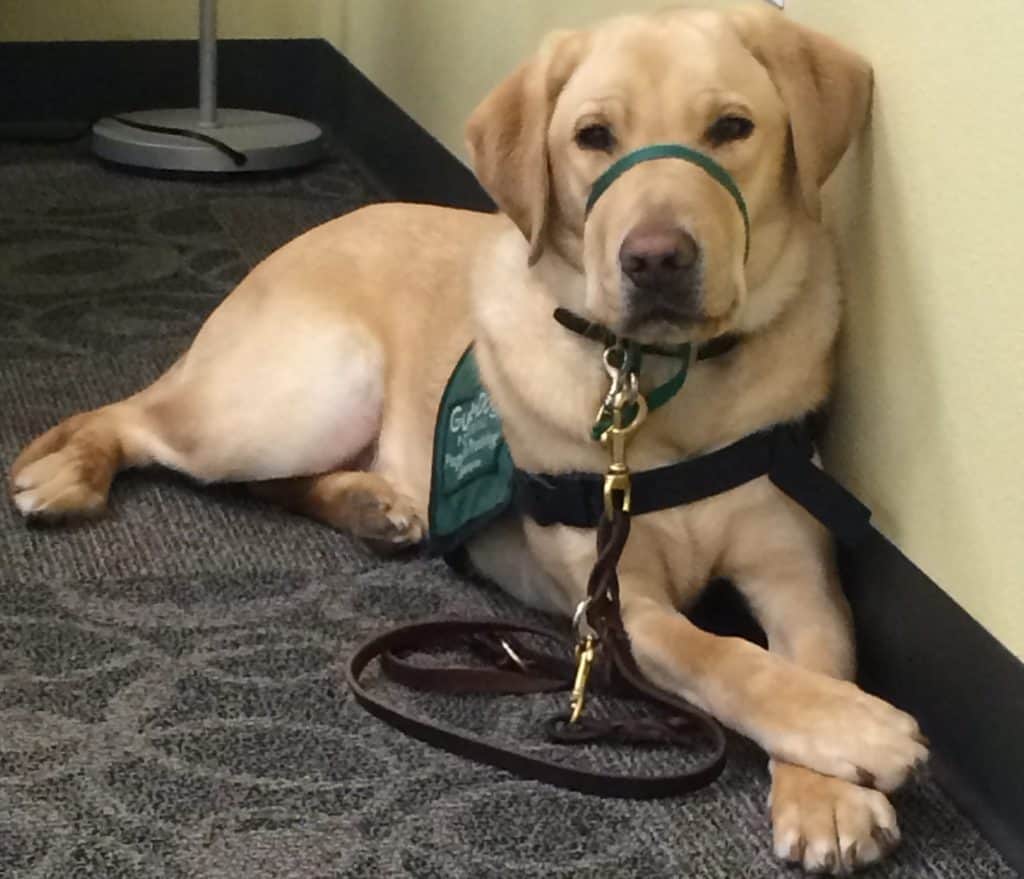 The months of training went way too quickly and soon Takoda reached his birthday.  We knew that he would be “re-called” around 14 months to go to the Guide Dogs for the Blind campus in Boring, Oregon for his final training before being matched with his person.

Soon, we received the email that we were to drop him off on a specific date.  I had told my daughter all along that Takoda was HER dog and I was not going to love him, but alas, that had not happened.  I cried for days before we tearfully dropped him off and said goodbye.

In the next few weeks, we were able to track his progress and he worked through different levels of training.  We were so proud of him when we got the call that he had been matched with a person and we were invited to attend his graduation.

The graduation was a special day with many more tears but I’d like to think some of them were happy tears.  Takoda was going to be with Robert, a man in Florida who had recently lost his eyesight due to illness.  Robert was so grateful for our service in raising Takoda and it was evident that Takoda knew he was meant for this job!  He was proud in his working harness and knew that Robert was now his person.

As we got back in the car after graduation, we had puppy number 2 in the car with us.  Schroeder was a black lab and very laid back.  My daughter held him all the way home as her tears fell, knowing that she would do it again! 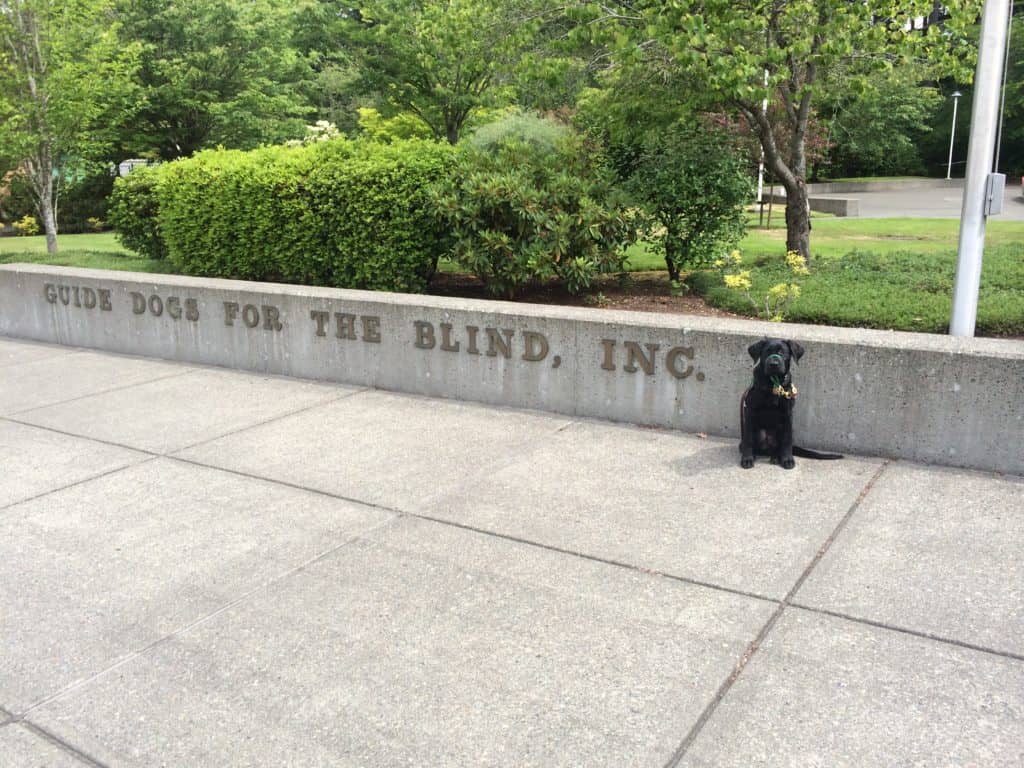 My daughter is about to graduate from high school and has raised three puppies along the way.  That’s more than three years of dog training and commitment.   All three of her dogs are working.  Two are working with a blind person and one was career changed due to a hip issue and is now a service dog at a school. 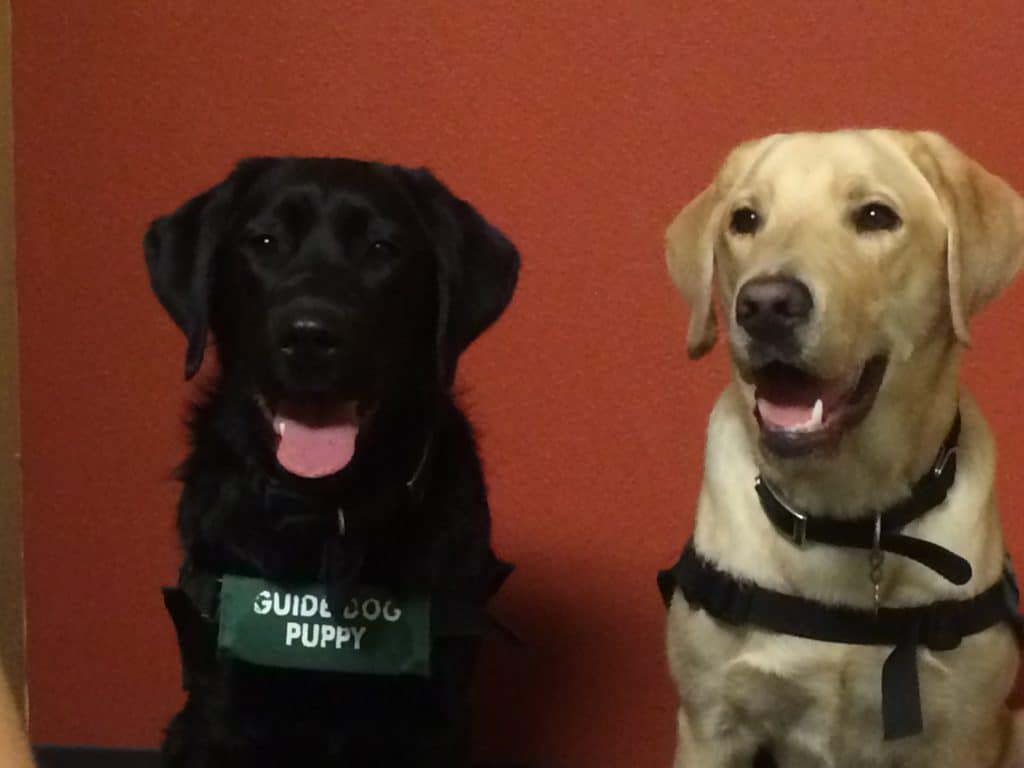 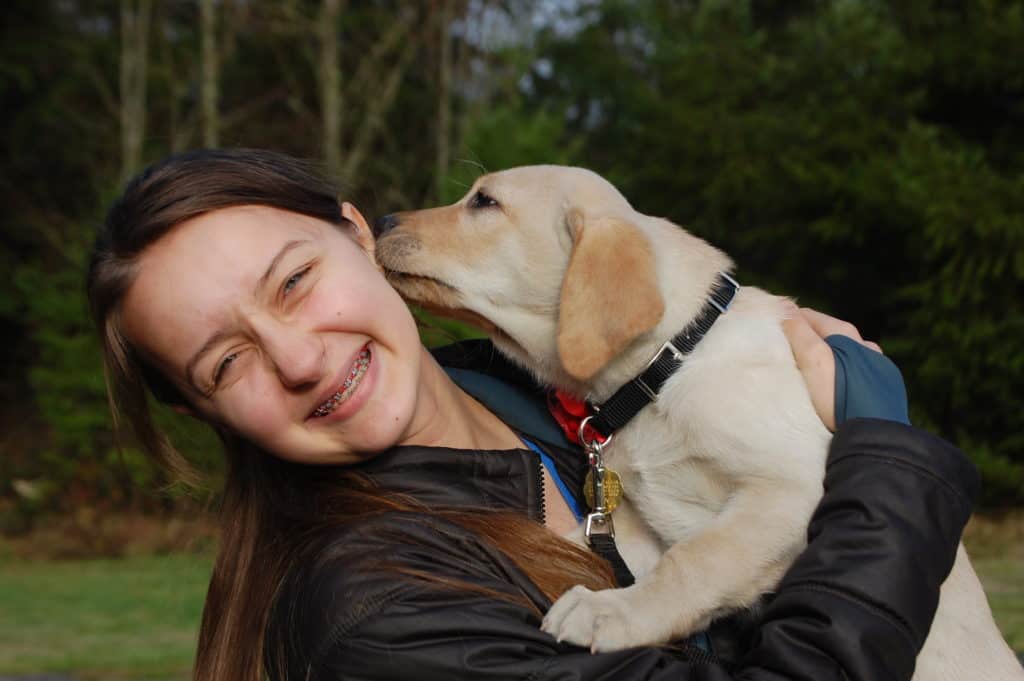 What kind of service project do you do with your family?  I’d love to hear about it!

Contents hide
1 Related posts you might enjoy!
1.1 Boomer at Your Service
1.2 35 Family Service Ideas
2 Some of our favorite dog products:

Boomer at Your Service

Some of our favorite dog products:

31 thoughts on “Family Service Project – Guide Dogs for the Blind”